"My songs cease, I abandon them,
From behind the screen where I hid I advance personally solely
to you.

Camerado, this is no book,
Who touches this touches a man,
(Is it night? are we here together alone?)
It is I you hold and who holds you,
I spring from the pages into your arms—decease calls me forth."
-- Walt Whitman, Leaves of Grass (1891-1892, Deathbed edition)
So Long!, page 382

Being a programmer, a creator of worlds, is both humbling and invigorating at the sametime.  Everytime that I work my craft, I truly have endless potential, I could create something which changes lives or I could write a shitty monkey patch to just get something "done".  Even if it does not seem like it, the choice is always up to me.

Today, more so than any other time in human history, we software developers have created a small part of the world that exist.  Our creations have influenced and altered human civilization.  Don't believe me, post something to your Facebook that you know will get a response from family or friends.

When my first nephew William was born, my wife and I were let to see him only an hours or so after he was born.  I did what anyone else would do of my age group, I took pictures of him and us which I shared on Facebook.  Almost instantly I got a ton of likes and comments attached to these pictures, it then dawned on me that these were most likely the first images of Will that a lot of people would see.

And if you gaze for long into an abyss, the abyss gazes also into you.

(generated from The Nietzsche Family Circus)

So what does this mean?  Which would you rather be associated with? 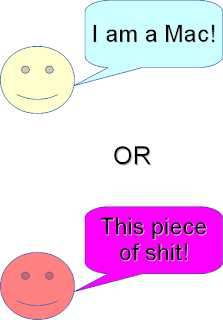 I have used my share of crappy software and third party vendor add-ons, when I use these "products" I cannot help but feel that the people who created them simply do not care.  I know this is faulty logic, in fact it is the fundamental attribution error, but still, WTF!  I am not alone in this feeling, in fact Uncle Bob recently blogged about his experience with Healthcare.gov and upgrading his Mac (neither of which were good experiences).

Becoming one with the world is not limited to programmer's end products!  This oneness with the world extends to their code they commit to source control!

At SCNA this Saturday, (November 9, 2013), Katrina Owen in her Here be Dragons talk linked the Prisoner's Dilemma to the development of software.  You see everytime you check in code you can either check in something that will be a pleasure for someone in the future (which might be you) or something that will cause a ton of swearing. 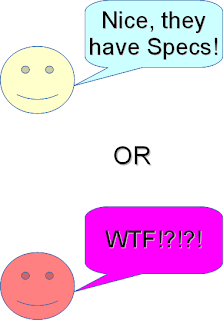 The choice is up to you, but the choice is even deeper than simply what you d.  Believe it or not what you check in influences other people.

Humans generally want to be cooperative and helpful to each other, but when crossed, O-boy the claws come out!  This applies to your code in the following way.

Say that you are generally careful with your code and do all kinds of well thought of things (today that would be BDD, unit testing, "clean code", ...).  Others will see this and will most likely than not follow suit and raise the bar even higher.  The code base will generally become better overtime and general happiness will ensue.  The team will get along and will become happy with their code and the code will become better ...

What happens if someone has a bad day and checks in some crappy code?  One of two things could happen: either people retaliate with crappy code which could cause a downward spiral or they could let it slide, fix it, and continue checking in careful, well thought out code. 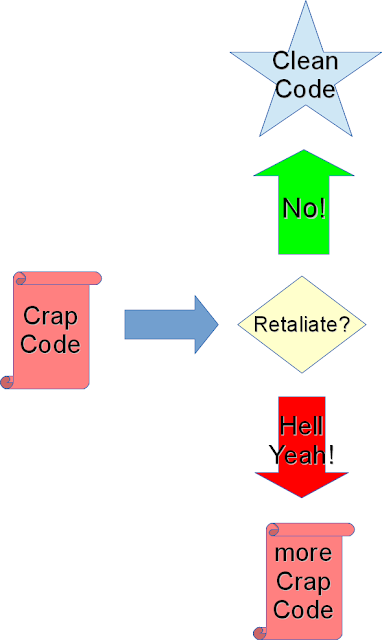 This my friends is the Prisoner's Dilemma!

With just one commit we have a simple Prisoner's Dilemma, but most programmers will work with each other for an undetermined number of commits across many days, months, years, and sometimes even decades!  This moves us from a simple single round of the Prisoner's Dilemma to that of an Iterated Prisoner's Dilemma.  In this type of game, the best strategy is what is known as tit-for-tat. 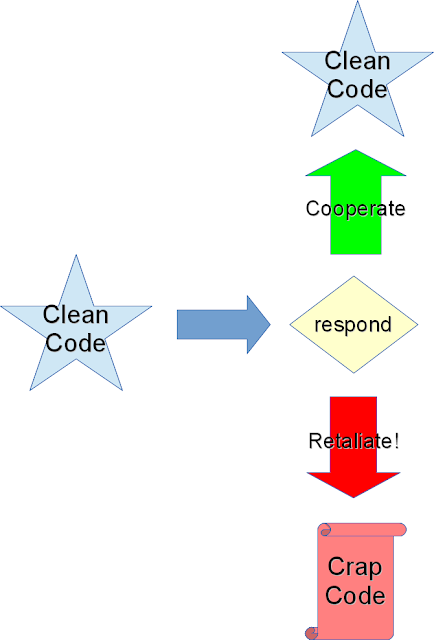 With code (and everything else) things are not as simple as cooperate and defect, this is for many reasons, the most important one being not everyone agrees on what "Clean" and "Crap" code is, but we are humans and have a sense of being treated fairly and not fairly.  Thus, one can know if they are in a defect spiral or not.  If you find yourself in a defect spiral you can either see if things will change by issuing a corporate or simply leave. Whoever fights monsters should see to it that in the process he does not become a monster.

Beyond Good and Evil, Aphorism 146
(generated from The Nietzsche Family Circus)

If you are in a defect spiral, leave before you to become a monster and always start by committing well thought out clean code.  Thus, be what you want the world to be, for your code is more than just code, it is part of you and you are part of it.
Posted by Mike Harris