One Data Structure to Rule Them All


For decades the battle cry of the LISP family of languages has been:

What is this one data structure to rule them all?  The list?  Well yes and no.  In practice I would say, at least in Clojure, it would be the Map data structure (not to be confused with the Higher Order Function called Map).

Say we have the following data structure: 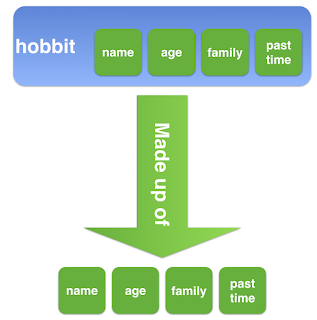 We can say that a Hobbit is made up of a mappings of name, age, family, and past time to values.

With ECMAScript 6 using Lodash we can use the pick and get functions to work with objects like they were Maps.

In the example above we see that with the pick we can obtain a new Map by selecting the attributes that we want.  If it is not found then it simply want be placed in the resulting Map.

If all that is wanted is one value from the Map then we can use the get function to obtain the value.

The get function let's us provide default values.

With Clojure we can use the keyword, get, and select-keys functions (to name a few) to work with Map data structures.

In the example above we see that we can use keywords as functions and that the Map data structure its self can be used as a function.

While using the keyword as a function for an association that does not exist will return nil.

We see also that select-keys acts much like Lodash's pick, in that it returns a new Map with the keyword associations selected.

There you have it, Map,  the one data structure to rule them all.
Posted by Mike Harris