"O, many
Have broke their backs with laying manors on 'em
For this great journey. What did this vanity
But minister communication of
A most poor issue?"
-- Shakespeare
Henry VIII
Act I, Scene I
Lines 83-87

I've moved further along in my journey of functional programming.  I find myself in a densely wooded forest of colossal pine trees.  The smell of juniper fills the air, bring with it memories of winters gone by.  This forest is where continuation lives.

Say you have function called f and you want f to take what ever value you give it and pass it to another function you give it that well call k.


What we do is pass a function through k which takes one argument, like this:

First we make the fizzer and buzzer. 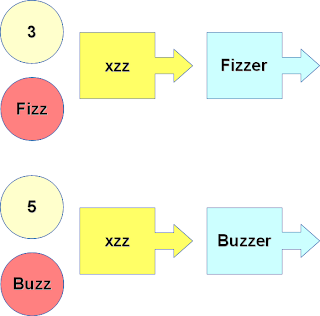 
We now have a fizzer and a buzzer which will return string options.

Now let's make the fizzBuzzer using these functions.  We'll also use List.choose so we'll have either ["Fizz"], ["Buzz"], ["Fizz";"Buzz"], or [] as a result of applying fizzer and buzzer against the numerical input.  We'll then use List.reduce to concat the possible ["Fizz";"Buzz"] result. 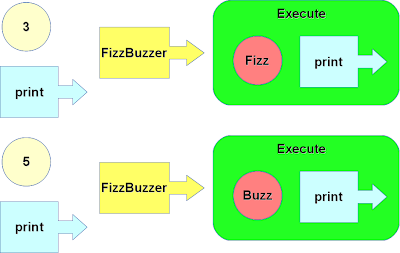 
Note this uses the fizz and buzz from before.

In order to consume this CPS version of FizzBuzz you could do the following:

The great thing about CPS with TDD is that you can pass what you are testing its own test case (see Full FizzBuzz example below).  I'll have more on CPS, once I wrap my head around it fully.  I am working on understanding one of the best responses I've seen on StackOverflow.