"You must be the change you wish to see in the world."
-- Mahatma Gandhi

Working in an industry with large amounts of data and having a need to apply changes to this data, I often find myself needing to apply functions against members of a data set.  In the world of functional programming this applying functions against a data set takes place on the island of higher order function on the beach known as mapping. Here are a few simple examples:


The identity function does nothing, it literally takes the input and passes it as the output, applying nothing against the input. 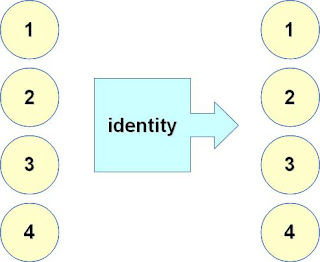 Both Haskell and F# have a built in function called id which is the identity function.


The "Hello World" for mapping (that actually does something) would be the increment by 1.  The function would add 1 to each input yielding an output with values that are one greater than the input. 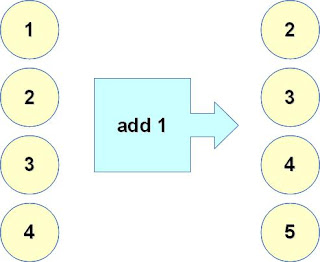 Both Haskell and F# allow for the applying of the addition operator (+) in a mapping,

Case 2: Obtain first element of a tuple (or any complex data type)


One use that might not be obvious at first but is really useful is to map a certain part of a data set.  Mapping a certain value of a data set can allow for other higher order functions to apply to element later on in a chain.  Lets say you have a list of tuples and would like to get the first value of each one. 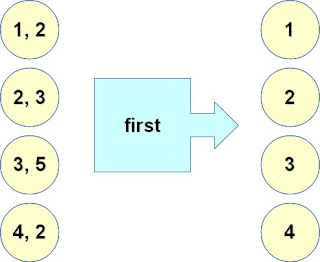 Both Haskell and F# have a first function which returns the first value in a tuple.

There you have it a few simple examples of mapping in Haskell and F#.