"Yet marked I where the bolt of Cupid fell:


It fell upon a little western flower,
Before, milk-white; now purple with love's wound:
And maidens call it ‘ love in idleness.’
Fetch me that flower – the herb I showed thee once"
-- Shakespeare, A Midsummer Night's Dream
Act II, Scene I, Lines 165-169

WHERE is my data?


In our journey through the SELECT clause we have finally moved on to the WHERE clause.

The simplest way to think of the WHERE clause is think of it as a filter.

Given our data set of playwrights:

If we wanted to only get the playwrights born in BC we would apply a filter using the WHERE clause which states only give me records where the birthEra has the value of BC. 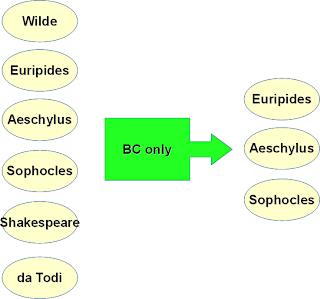 SELECT *
FROM playwrights
WHERE birthera = 'BC'
;

In our WHERE clause we state that the value must equal BC, yielding the records of Euripides, Aeschylus, and Sophocles.

Likewise we can create multi-conditional statements to apply even more filtering rules against our data set.  Say we want to limit our records to just the playwrights born after the founding of America. 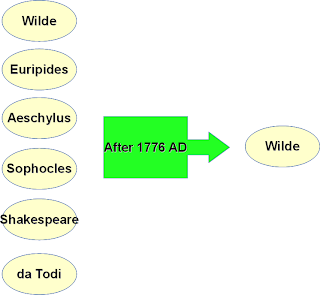 We can use a logical AND to state that the birthEra must be AD and the birthYear must be after 1775.  We can of course also write the SQL statement using a greater than or equal to 1776.

Both will yield the same resulting record set.
Posted by Mike Harris