Memoize OR How to Trim Your Function Budget

"Roman, remember by your strength to rule


Say you have an operation in a function that cost a lot, like reading from a database or launching a missile.  You would like to be able to call the function as often as you need to for your algorithm but you would like to only do the database read or missile launch once if the arguments have not changed.  This is what memoize is used for.


Returns a memoized version of a referentially transparent function. The memoized version of the function keeps a cache of the mapping from arguments to results and, when calls with the same arguments are repeated often, has higher performance at the expense of higher memory use.
-- Memoize's doc string in clojure/core.clj

In my own words (yeah, I think in pictures). 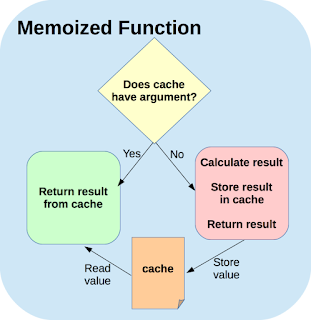 
There you have it, you can freely read from your database or launch missiles in your function without worrying about the number of times you call said function with the same arguments.
Posted by Mike Harris